Webster surely is finding her own voice

The first time I heard music by Christine Webster was back in Vital Weekly 1088 when I reviewed her USB drive ‘Diary #1’. On the cover of ‘Iceberg The Drift’ Webster writes that this is her second release to deal with a natural catastrophe. 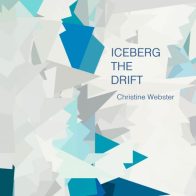 First was “Fuskushima Days projects in 2012” (I am not sure if that is a natural catastrophe or human), it is now about the “Larsen C Ice Shelf Rift in Antarctica, which during
the summer of 2017 caused the complete breaking of the oversized A-68 iceberg, drifting now in the open sea for years, maybe even decades”. Like on her previous release, Webster uses modular electronic modular electronics, although now they are not specified as to what kind of machines. Whereas the previous release was quite playful and open, this new seems to be more composed and less open. The music reminded me of modern electronics, sounds bleeping about, but in a rather slow mode and with quite some reverb to add a fine sense of space. Sometimes she uses tones from her set-up that remind me of small and larger blocks of ice breaking and falling apart. I am not sure but like her previous release some if not all of these pieces have a somewhat ‘live’ feeling to them, especially in a piece like ‘Tensile Stress’ and immediately this becomes a somewhat playful piece. Throughout however the music is very solemn and slow in development, perhaps, indeed like a massive iceberg adrift, but a very slow adrift it is. It is a most enjoyable piece of music (all seven of them) and it seems a step forward in the progress of Webster’s music. If you like modern musique concrete than you should surely check out this particular new composer. I am not sure, if she is from France, but her work surely sounds very French, say the INA-GRM studio scene, and Webster surely is finding her own voice. (FdW)
––– Address: http://sublunarsociety.net